Excitement bubbles beneath my skin when we have a Cape Byron Lighthouse elopement. There is a certain novelty to it, and there is also so much beauty. But it IS the most easterly point in Australia, and there is a reason why so many humans flock from all edges of the world to see this Lighthouse and to look out onto Australia’s incredibly beautiful, and picturesque Byron Bay coastline. It is a sight that must been seen with your own eyes to fully experience the vast beauty of the blue beneath!

It’s no wonder Tim and Jade chose to elope there! We see all kinds of love being in the wedding business so when we have a couple who have spent the years together refining and establishing their love, it’s a beautiful thing to see; Jade and Tim had a specific date in mind for their elopement (2nd April, 2019) they chose this date because it was the day before their 10 year anniversary! (Special!)
The two had a certain knowing between them, they were getting married but not to lock in deeper commitment, but to rejoice an already formed and stable love already existing between them.

Being the beginning of the wet season in the Northern Rivers, we had on/off heavy downfalls of rain all day. Because of the weather it meant the usually VERY busy lighthouse had minimal human traffic, which meant a much quieter and more intimate elopement for the couple, which was really nice. But it also meant the usual blue skies and sparkling ocean wasn’t on show. We had grey clouds, crashing waves beneath and wind; all of which have their own beauty.

So we clustered together under nearby shelter and with pure luck the rain paused for the ceremony, the kids ran around the beautiful grassy area where a circular arbour was set up with a diverse array of flowers clinging to the frame. We clung to our umbrellas and held them overhead when necessary. When all was said and done the duo jumped in a hired kombi and we snapped some moments with them before the sunset! What a hoot!

How did you meet?

I (Jade) was out with friends for my birthday at a local nightclub called Embassy, near the end of the night. I went back to our table that some of my friends were at to find Tim and his younger brother also sitting at our table, Tim being the quiet one didn’t say much his brother was doing all the talking but when I looked up at Tim he gave me a cheeky wink and offering an even cheekier birthday kiss and that’s where it all started hahaha

Tell me about your first date!! Who asked who and how did it go? Where was it?

At that time I was living up the coast near Forster about 4 hours away from Tim so it was a couple of weeks after we met that I was back in Sydney. We spoke on the phone and sent text messages every day.

Our first date we went out for dinner to Hogs Breath, we still after nearly 10 years have the tiny little pig that was on their shelf that Tim took and gave it to me afterwards. After dinner we went back to Embassy were we first met a couple of weeks earlier and I pretended I was interested in watching the footy

What does the commitment of marriage mean to you? 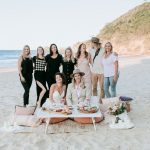 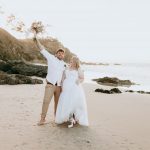 Broken head without the headland walk for portrait

Introducing our cream Kombi by @foreverkombis 👌

How beautiful is the filtered light 👌 Little